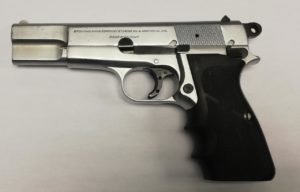 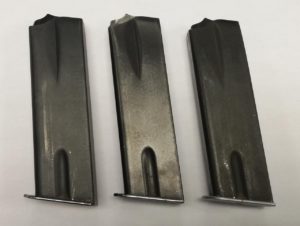 The Browning Hi-Power is a single-action, semi-automatic handgun available in the 9mm and .40 S&W calibers. It was based on a design by American firearms inventor John Browning, and completed by Dieudonné Saive at Fabrique Nationale (FN) of Herstal, Belgium. Browning died in 1926, several years before the design was finalized. The Hi-Power is one of the most widely used military pistols in history,[6] having been used by the armed forces of over 50 countries.[1] After 82 years of continuous production, the Hi-Power was discontinued in 2017 by Browning Arms, but it remained in production in some countries, under license.[7]

The Hi Power name alludes to the 13-round magazine capacity, almost twice that of contemporary designs such as the Luger or Colt M1911. The pistol is often referred to as an HP (for “Hi-Power” or “High-Power”),[8] GP (for the French term, “Grande Puissance”), BAP (Browning Automatic Pistol), or BHP (Browning High-Power). The terms P-35 and HP-35 are also used, based on the introduction of the pistol in 1935.

Several sources indicate that the official name was initially “High Power”, while it was manufactured in Belgium by Fabrique Nationale prior to the German occupation in World War II. Production of the weapon then moved to a John Inglis and Company plant in Canada; at some date afterwards, the name was changed to “Hi Power”. (Some sources indicate that the name change was not until the 1950s.) Production returned to Belgium after the war, in 1944 or 1945.[9][10] Nonetheless, the term Hi Power has been the most commonly used in articles over the past decades, regardless of the year of manufacture. Versions of the handgun continued to be made at the FN factory in Belgium under Wehrmacht control, with the designation “9mm Pistole 640(b)”.[11][12][13]

In February 2018, FN Herstal announced that the Hi-Power will end production.[

Be the first to review “BROWNING HP 9MM” Cancel reply